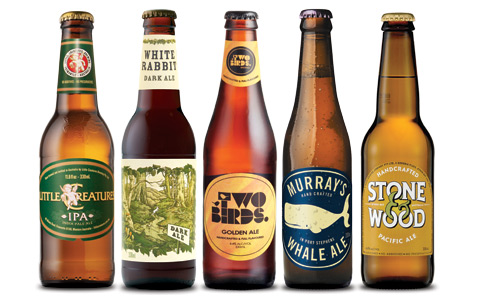 Beer giant SABMiller report a loss in profits while craft beers are on the rise in Australia.

Whether it is an Indian Pale Ale or a Hefeweizen, a Bock or a Pacific Ale - Australian’s are drinking more craft beer than ever before.

SABMiller, the brewing giant that owns VB, Carlton Draught and Crown Lager, has reported a fall in sales over the past year citing “competitive intensity” as the biggest reason for the dip.

Head into any bar in any major city in Australia and it is almost a guarantee that they serve some kind of craft beer - whether it is a Vale Ale from McLaren Vale, SA or a Four Pines from Manly, NSW - the choices of Australian beer are growing rapidly.

When a company the size of SABMiller is reporting a loss, albeit quite a small one, it is time to sit up and take notice.

"Victoria Bitter declined by one per cent and Crown Lager declined, reflecting both a strong prior year comparative and price compression from imported brands," said SABMiller in its March 2014 full year results.

They continued, saying that “contemporary brands are growing strongly,” suggesting that SABMiller’s grip on the Australian beer market is slipping slightly with the rise of smaller brews.

Craft beer isn’t all as it seems however, as SABMiller, Lion and CUB own a 47% market share of the ‘craft’ market in Australia. These multinationals have bought out many smaller brewers while maintaining their ‘craft’ status.

Tipples such as Little Creatures, Fat Yak, James Squires and Matilda Bay are all owned by larger brewing companies so if you are chasing the craft experience think twice the next time you order a One Fifty Lashes.

SABMiller repositioned Cascade, the oldest continually operating brewery in Australia, a few years ago to try and take a chunk out of the craft market which apparently has not worked.

The likes of Victoria Bitter and Carlton will still be at the forefront of the Australian market but the rise of craft beers across the country will continue to eat away at their profits. Craft beers may not have the clout of the biggest brands but it looks like Australian consumers are more concerned with taste than anything else.

Know your beers, become a Professional Bartender at the Sydney Bar School.